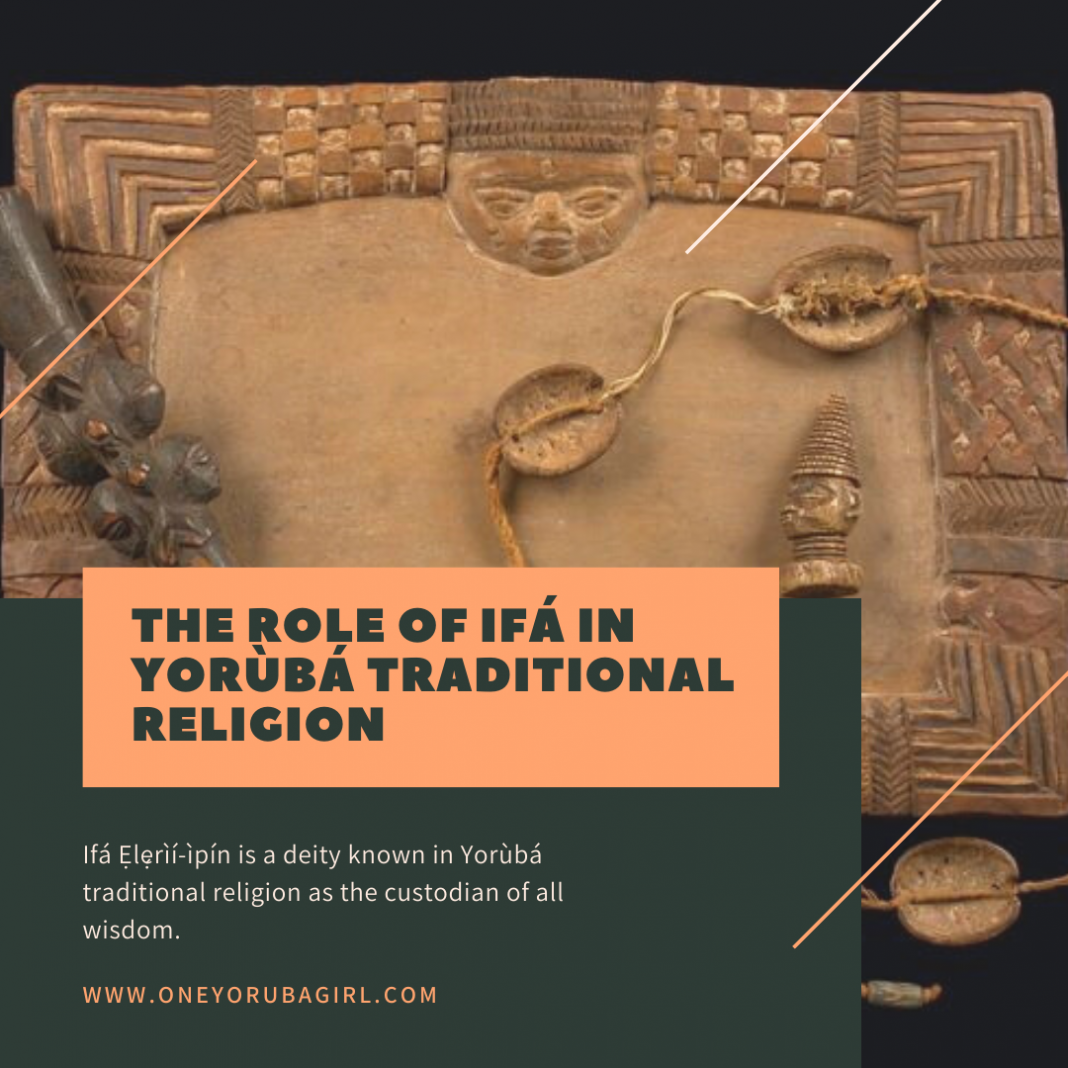 In Yorùbá traditional religion, deities (òrìṣà) are seen as mediators between man and the Supreme Being in charge of the universe. This Supreme Being is called ‘Olódùmarè’ (we shall dedicate a whole other post to the etymology of this name).

Just like a commoner cannot directly access his king, Yorùbás also see the Supreme Being as One too mighty to be approached by mere men. This knowledge created the worship of the 401 deities present in Yorùbá religion, each with an area of specialisation, serving as messengers of man’s request to God.

Ifá As a Deity

Ifá Ẹlẹ́rìí-ìpín is a deity known in Yorùbá traditional religion as the custodian of all wisdom. Although its physical symbols are small, the Yorùbás believe there isn’t any topic, phenomena, or human discourse strange to it – ohun gbogbo n’Ifá ti fà tán. Neither is there any issue unsolvable when tabled before Ifá. Hence, its name, Akéréfinúṣọgbọ́n (the small one whose inside is filled with wisdom).

Ifá can also be seen as man’s defender in relation to other deities. When one’s òrìṣà is angry or plans to fight, it is Ifá who will inform and broker peace. Ifá would take up one’s case with the responsible deities, deliberate with them, and reveal a solution in terms of sacrifice (ẹbọ rírú).

As expected, the origin of Ifá is one that no one can ascertain. Some say it was originated by a man from the north named Sẹ̀tíù who came to Ifẹ̀ with pebbles he used for incantations. Some others believe Ọ̀rúnmìlà as the progenitor, owing to an event as narrated by Ifá in Ìwòrì Méjì – Ọ̀rúnmìlà gave his children 16 seeds (ikin Ifá) to communicate with him in heaven whenever they require his guidance and wisdom. (Sounds like another post!)

Consulting Ifá before taking any significant step or embarking on any project is the standard process in Yorùbá tradition. Ifá is consulted for issues ranging from childbirth, to the right life partner for their children, the chosen trade by one’s Orí, the life path of a newborn, etc. This is done because Ifá is believed to be the voice of God providing guidance to man (oracle). While no Ifá verse is created on the spot of divination, the Ifá verse prescribed by Ifá would narrate past events that have happened to ancient characters in similar fashion to the issue on ground, together with applications solutions.

Ifá dídá (consultation) is incomplete without the following, to mention a few:
I. Ikin/Èkùrọ́ Ifá: These are the original age-long seeds used for divination and now reserved for private consultations. Ikin Ifá are 16 in number and gotten from a special palm-tree (ọ̀pẹ̀ Ifá) not harvested for palm-oil.
II. Ọ̀pẹ̀lẹ̀: Gotten from the Apúragà tree, these substitutes to Ikin Ifá are each half of a split seed the Babaláwo uses for general consultation.
III. Owó-ẹyọ àti Egungun: These are used to tell Ifá’s response to a matter. Owó-ẹyọ signifies ‘yes’, while egungun stands for ‘no’.
IV. Ọpọ́n Ifá: This is a flat wooden surface in form of a plate upon which the items mentioned above are placed. It can be big or small (ọpọ́n kékeré àti opọ́n ńlá), with some etched in beautiful drawings.
V. Ìrọ́kẹ́/Ìrọ́fá: This a short thick staff used to beat the ọpọ́n Ifá in rhythm as the Babaláwo recites ẹsẹ Ifá.

The literary corpus of the Ifá system of divination is Odù Ifá. There are 16 principal or major Odù (Ojú Odù) and 240 minor Odù (ọmọ/àmúlù odù) in the Ifa divination system. All together, there are 256 Odù, with each possessing 600 verses (ẹsẹ Ifá) at least.

To understand Odù Ifá better, let us compare to the Bible. These 16 principal Odù can be likened to different books of the Bible, with each possessing different names, chapters, and verses. Each of these 16 principal Odù (books) possess sixteen more derivatives – forming the 240 ọmọ odù that can be referred to as chapters. All of these Odù then possess 600 ẹsẹ Ifá (verses) each, at least. However, in terms of length, an ẹsẹ Ifá (verse) can comfortably pass as a whole chapter in the Bible.

Use of Language in Ifá

Ifá verses can be long or short, depending on the theme they exalt – the history of the Yorùbá people, the biography of deities, the cure to ailments, exhortation on good character, solutions to different problems that humans face like death, poverty, barrenness … Nothing is too far out of Ifá’s reach. Ọ̀yẹ̀kú Méjì, for example, talks about death and everything surrounding it.

The use of language in Odù Ifá is archaic and deep. Even so, we can always get the sense of events so intricately woven and so beautifully told in what sounds like a more original version of the Yorùbá language, that its meanings are not often grasped by non-initiates who do not speak its language.

Ifá verses employ stories and parables to tell the reason why some things are the way they are or to provide a solution to a certain character’s problem. Figures of speech, a heavy dose of pun and personification in particular, are also instruments of Ifá storytelling, as animals and inanimate objects take up human traits. For example, in Ọ̀yẹ̀kú Méjì, Ẹsẹ Èkarùn-ún:

As explained earlier, Ifá verses are filled with stories and parables that mirror human experiences – after the storytelling comes the prescription of a solution or ẹbọ (atonement). Of all the scholartic delineations on the order of the Ifá literary corpus, below is the standard procession:

"One Yoruba Girl" website is a curious agenda, a soft home-calling to my kin around the world who like me have lost touch with their roots; that they may be able to trace the road back home with the experience and knowledge I garner and am able to share with you. You are my family now.
Contact us: atokun@oneyorubagirl.com
© One Yoruba Girl. All rights reserved | Website Crafted with 💕 by EKIAA Consults